Top 10 Belt Brands in The World: Most Expensive Belts Brands

Ever wonder why certain belts are more expensive than others? Belts can make any outfit more fashionable and add an edge to it. Belts can be costly because of the design and manufacturing costs. High-quality materials are used to decorate the most expensive brands of belts with rare ornaments and metals.

Many people consider a belt a necessity. It has been an indispensable accessory for men. Its style and quality are uncompromising. The most expensive brands of belts use diamonds, platinum, and gold to make their products. Some leather is made from animal skins, such as the alligator, crocodile, and python. 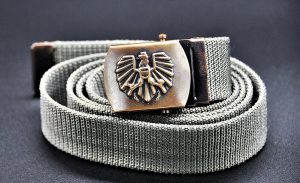 Price is determined by the material used to make the belts. A belt that costs more than $1,000 will be one reason. These are the ten most expensive belts in the world.

Salvatore Ferragamo has been a renowned brand in high-end fashion. It has been making leather accessories and goods since the 1920s.

It has a wide range of men’s belts, some of which can be purchased for as high as thousands of dollars. The adjustable Gancini belt is part of the brand’s high-end collection.

The Adjustable Gancini Belt is available for $995.00. The accessory was made from premium crocodiles and finished with sleek ruthenium.

The accessory also features a refined blend of textures and tones, giving it a sophisticated look. For special occasions, you can wear a belt with pants or a suit.

Louis Vuitton makes some of the most luxurious belts for men. Its belts are classic and fashionable, which is what sets it apart from other brands.

The company is also known for making belts that are inspired by seasonal trends. Although it doesn’t use leather for most of its belts, they are costly due to their timeless luxury and elegant designs.

Stefano Ricci is the designer of some of the most luxurious designer belts in the entire world. To show quality and detail, all its men’s belts have been handmade.

The company has previously produced a belt buckle made of 18-karat gold and diamonds valued at $124,000. The Handmade Crocodile Belt, which costs $4,000., is currently the company’s most expensive designer belt.

The strap was made from genuine crocodile leather, and the buckle was made using galvanized palladium. This belt is elegant and can be matched with any suit or outfit.

Hermes Entriviere is the brand that makes the most expensive belts in the world. The brand offers a wide range of leather belts that can be reversibly worn.

The buckles are hand-polished and go through extensive metalwork. The Constance belt buckle and Leather strap are examples.

The cost of the belt is $5,260. The buckle is made from brushed palladium-plated metal, while the strap is made of matte crocodile. It is part of the company’s customizable belt collection. This is why it is so expensive.

The company does not sell separate buckles. You can purchase the straps separately and then combine them with a clip to meet your needs.

For many years, Billionaire Couture has been creating extravagant belts for men. The Billionaire Italian Couture Alligator belt was one of the most expensive. This accessory was made from alligator skin.

It used traditional Italian design to form it. The accessory also featured a silver buckle which increased its cost to $2,850. Billionaire Couture, one of the most recognizable belt brands, continues to produce expensive accessories for men.

Billionaire Couture is a company that targets wealthy men. This is why its products are so expensive. None of the belts are less than $400 today. The San Antonio Strass belt, made of crocodile leather with an oval metal buckle, is its most expensive feature. It is $1,980.00

Cartier is a brand that has left an indelible impression on the world of luxury jewelry and culture. Each piece is handcrafted by Cartier using high-quality materials. Cartier is known for its elegant and expensive collection of belts.

This explains why its products have high prices. The belt Santos de Cartier cost $2,690. To make the strap, the company used black crocodile leather. To show class, it has an ardillon with Cartier signature in a golden finish.

Ralph Lauren belts are not like other brands. They target men of different social classes. A designer belt can be purchased for as low $50. The company also offers a selection of some of the most luxurious men’s belts.

The Alligator Sterling-Buckle Belt, for example, costs $1,850. This is an elegant and versatile accessory made of alligator leather. The Stirrup Turn-Back Suede Belt, which costs $595, is in the middle range. It is made from soft calf suede and features a palladium-finish stirrup.

Versace belts are a luxurious addition to any man’s look. This accessory is made in Italy from the highest quality materials. The company embellishes leather belts with emblematic buckles that are influenced by its rich heritage.

One example of a luxurious product in the men’s line is the Palazzo Croc Leather Belt. This belt is made from crocodile and has a gold-tone Medusa buckle. The accessory will cost you $1,150.

The most expensive belt buckle ever made was created by Roland Iten and Bugatti in 2011. The white gold buckle, known as Roland Iten CalibreR822 Predator, featured red gold accents. It also featured 14.15 carats of baguette- and round-cut diamonds.

It was made from high-end titanium and cost $400,000. The company produced only three pieces. Roland Iten doesn’t make belts. It does, however, make belt buckles that are considered expensive around the world.

The R8 Mark II Driver belt is available for purchase at CHF 32’300. This would be equivalent to around $41,000. You will receive an accessory made of solid gold with titanium that comes in 30 different finishes. Only five buckles are available

Gucci once ordered the most expensive belt in history, worth $256,970. Gucci’s diamond belt was made of platinum and diamond materials. The company incorporated them into the fabric. The signature double G symbol is a beautiful accent to the 30 carats of diamonds on this belt.

Gucci continues to offer a high-end collection of men’s belts. The Reversible Belt with Square G Buckle costs $590. The belt features shiny gold-toned hardware and leather that has been tanned using either metal or non-chrome tanning processes.

Gucci, Hermes Entriviere, and Stefano Ricci are the most expensive belt brands worldwide. Versace is also a top choice. These brands sell belts for as low as $400. Roland Iten’s impressive collection of belt buckles made from titanium and gold, with 30 pieces total, is the best. [1]

The Most Expensive Belt in The World [Top 10]

A 14-carat weight of precious stones has made the Roland Iten belt a luxurious one. This is a collector’s piece, created jointly by Roland Iten and Bugatti. This belt weighs approximately 90 grams.

This belt was created by Gucci and Stuart Hughes, a British designer. It is limited in number. Republica Fashion belt is a luxurious and expensive one, boasting 30 carats diamonds and 30 carsats gold.

Versace’s Medusa 3D belt features the iconic logo and a buckle made of diamonds. Like all Versace products, this belt is meticulously crafted using the highest quality leather and attention to detail.

Ralph Lauren’s Alligator Engine belt is a well-known accessory with many admirers, especially in the United States.

Stefano Ricci is a synonymous luxury. He used crocodile leather for the belt and palladium as the buckle. The belt was named Crocodile & Palladium.

Many consider this crocodile-palladium leather belt to be an artifact. It is therefore not as expensive as you might think.

It is made from crocodile skin and shows off the finest of Italian craftsmanship. On the silver buckle, you can see the Billionaire Italian Couture logo.

This belt is made in shiny black crocodiles and has a calfskin interior. The buckle of the belt is made from brass.

Hermes is known for luxury accessories, and this men’s belt from Hermes is an excellent example of how expensive a simple accessory can be.

This luxurious belt is made from gold, as the name implies. It is handcrafted and lined with 70 small pyramids made of 18-karat Gold.

The Most Expensive Belt Buckle: The Calibre R822 Predator

A belt buckle can be considered a piece of art. The Calibre R822 Predator belt buckle is the most expensive in the world, at US$400,000. This beautiful buckle comes from Roland Iten. It’s more like a piece of mechanical jewelry than a belt buckle.

Because it has intricate mechanisms, this belt buckle shouldn’t be kept in the closet. These exquisitely crafted watches are made of some of the most exotic materials and finely machining as Swiss watches.

The most expensive belt buckle comes with 167 components. It doesn’t come with a belt, and the price is only for the buckle. The Predator belt can be attached quickly and easily to any belt.

The Predator belt buckle is said to have a quadruple-complication belt buckle. The 4th of these complications is a security device that will prevent any of the first three from happening accidentally. The buckle is made with 387 round-cut and baguette-cut diamonds totaling 14.15 carats. High tech titanium is used to make the mechanical platform.

Only three Calibre R822 Predator belt buttons will be produced. They are a rare collectible and a high-end item for the wealthy.